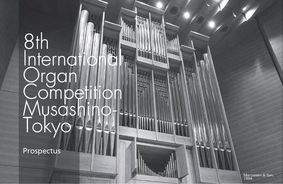 Open to All Organists with No Age Limit

For the First Prize Winner:
JPY 1,200,000
Concerts in Japan
CD release on NAXOS with worldwide distribution

The deadline of the application is 20 January 2017 (postmark) There are many levels of contemporary organ composition ranging from the extremely difficult to the very straightforward. Most organ composers wish to be seen as great writers who produce difficult and challenging pieces which will achieve quick recognition and be played by the world’s top virtuosi. This is a praiseworthy ambition but it is rarely fulfilled.

If one studies the ability of organists one sees that about 95% are ordinary players who perform in church on Sundays on not very good instruments. Of these 95%, very few are professional players and many have only a basic technique. Many are reasonably open-minded about repertoire and welcome new music which is written for players of their ability who have little time to practice. They take great pride in their work and always offer their insights and talents to congregations and give them voluntaries which raise their hearts and minds to the Creator.

I plead for composers to write for this important group; take it seriously and produce music which is tuneful, attractive and appealing. These organists are never going to play virtuoso music – they can manage a simplified version of Widor’s Toccata but not much beyond this. If one looks at the great output of French organ music, one sees that composers like Franck, Lefebure-Wely and others wrote much very pleasant music for precisely this market. It did not prevent them establishing a reputation as great virtuoso composers – quite the contrary.

Contemporary composers should write for this market and extend its repertoire. Many ordinary organists will applaud and thank them for doing this essential and valuable work.

Have you ever wondered how to get those professional touches which add sparkle to your choir’s performance? Go to Music-for-Church-Choirs.com to find advice, information, and regular free choirtraining from Colin Mawby in the monthly Newsletter Vivace!

I learned to play organ in the Gorky conservatory in the class of Russian organist Galina Kozlova, who, unfortunately, died at the peak of her artistic career. In 1990 I emigrated to Israel, unaware that in Israel an organist is about as useful as an Arctic researcher. Nonetheless, I soon became involved in various concerts and festivals, which gave me hope for a bright musical future. I was especially proud to perform frequently with musicians from the famous Tel-Aviv Symphony Orchestra.

My concert activity
I started the career of a concert organist through meeting a Swiss lady, Margrit Pfister. While she was neither a musician nor artist manager, she very successfully arranged my organ performances in various countries. Organist and musicologist Peter Brusius from Marburg also helped me immensely. I dedicated my organ symphonies No. 2 and 3 to Margrit and Peter. Thus, I have been concertizing throughout Europe for 13 years. I am fortunate to have performed in:

And, of course, Cologne Cathedral, where I flew just hours after having participated in my wife’s labor and delivery of our child.
In the future, there are performances planned in München Dom, in Gent Cathedral, in Dresden’s Kreuzkirche, and in Luxemburg’s Sacre-Coeur.

My life in Israel as organist and composer
I made my home in northern Israel, in the lovely town of Carmiel. It is quite far from the cultural centers. There I started teaching piano in the local conservatory. Of course, it was impossible to make a living on the conservatory salary, and through a big personal favor I obtained a job very far removed from organ music — in the department of street sanitation. When the Israeli media learned about this, I was featured in the news and the most popular TV shows. There were films made about me, and I became so well known that people recognized me in the streets and stopped their cars to say “hello” to me. That’s when I got a call from the office of then-Prime Minister Itzhak Rabin and was asked to perform at one of his meetings. An electronic organ, “Johannus”, was brought, and I played Bach chorales (whose content doesn’t fit Judaism very well), and the “Toccata without Fugue” in d. Everyone was very happy, and Rabin said he’s known about me for a while and values me.

In 1993 I was invited to the Rubin Academy of Music and Dance in Jerusalem to teach organ. In spite of the long distance between my home and the Academy (200 km/124 miles) I drove there once a week after my night job, taught organ, and returned the same day to work at night once again. This lasted for four years. There was no pipe organ in the Academy, and my lessons were taught on the electronic “Johannus” to the very few people in Israel who want to study organ.

I started composing for the organ after the 1995 assassination of Itzhak Rabin. My first piece is titled “Mourning Itzhak Rabin”. For a long time, I wanted to hear Jewish music on the organ, and decided to start contributing to that cause. After a few new pieces, I composed the “Jewish Symphony” for the organ, which became my “calling card”. Swiss organist Patricia Ott plays two of my “Jewish” opuses. Recently French organist Domenico Severin performed the finale of my Second symphony in Paris in Eglise de La Madeleine. I dedicated my “Toccata Domenicale” to him. It turned out to be quite complex, and I don’t know whether he is happy with my “gift” or not.

I released four CDs with “Hänssler” (one of CDs is performed on the piano). Also I released a CD recorded on the piano with my daughter Iryna Krasnovska. She is studying in the music academy of Basel, and in March 2004 won first place in the Rahn Competition in Switzerland.
Soon a new CD will come out with my three organ symphonies, recorded on the wonderful Seifert organ in Rhede, Germany.

I must say that I almost do not perform in Israel, save the rare concerts in Tel Aviv’s Immanuel-Church on a small (16 rank) but lovely instrument. When I contact organists in other countries and ask about opportunities to perform in their cathedrals, they naturally ask me to arrange their concerts in Israel. Since I am unable to help them with this request, our dialogue usually ends right there.

I would very much like to find an artist manager. I have been contacting U.S. churches and synagogues offering to perform there, with limited success. As an Israeli organist, an opportunity to perform the Jewish symphony in a synagogue or temple would be a unique experience both for me and for the listeners.

Other organists in Israel
First and foremost I would like to mention Valery Maisky – very talented and widely known organist who emigrated from Russia. He died in a tragic auto accident in 1981. He was the brother of world-famous cellist Mischa Maisky. Valery’s daughter Nira Maisky, who was born in Israel, continues in her father’s footsteps and is currently studying in the Royal Conservatoire of Music and Dance, The Hague, Netherlands.

Elisabeth Roloff – wonderful German organist, who has lived and worked in Israel for many years. She is currently the organist at the Redeemer Church in Jerusalem and faculty member of the Jerusalem Rubin Academy of Music and Dance (episodically, as the students appear). It was she who graciously recommended me to the Academy. Elisabeth is an active concert organist and is known around the world.

Juan Onassis came to Israel from Uruguay in 1969. He is the organist of Immanuel Church in Tel Aviv – Jaffo. Thanks to him, we Israeli organists have the opportunity to perform in our country, because regular organ concerts are held only at St. Immanuel.

Alexander Gorin is an excellent organist from the former USSR, who emigrated to Israel in 1990. Currently he teaches organ at the Rubin Academy of Music in Tel Aviv. He also gives concerts in other countries.

Rina Shechter emigrated from the former USSR. She performs solo and with various choirs. I have heard her only once and was very impressed with her informed, thoughtful playing.

Sabin Levi came from Bulgaria. He studied organ in Jerusalem Rubin Academy of Music and Dance with Elisabeth Roloff. Currently he received his Ph.D. from the University of Kansas at Lawrence, in organ (studying with Prof. James Higdon) and composition (studying with Prof. Charles Hoag). Sabin Levi has established himself as a brilliant performer and excellent composer .

Everything I wrote above is about immigrants – people who came to Israel from various countries. Now a few words about Israeli-born organists.

A person born in Israel who decides to study organ is extremely rare and unique. I can say that this person traveled a road that does not exist, especially if they are from a religious Jewish family with Yemen roots, such as Pnina Adany. Pnina studied in the Jerusalem Rubin Academy of Music and Dance with Elisabeth Roloff. There was a period when she frequently performed in various concerts and festivals. Currently her performances in Israel are rare (as they are rare for the rest of us).

Yuval Rabin was born in Israel and studied with Elisabeth Roloff. After that he continued his studies in Basel with Guy Bovet. Yuval Rabin is also an excellent composer and he released a CD with Israeli organ music.

About the First Israeli Organ Festival
The most important event in the Israeli organ music life was the First Organ Festival of 2003. The festival was organized by Gerard Levi, who poured his heart and soul (and money) into it. Based on the financial results, I think the first festival was also the last. In the musical sense, the festival was a great success. The concerts were held in Tel Aviv, Jerusalem and Haifa. The Haifa University organ was built by Israeli organbuilder Gideon Shamir. Unfortunately, this organ is not used often enough, mostly being “furniture”.

A unique feature of the festival was that each performer played two concerts, and there was to be no repetition of any piece throughout the festival. This created certain difficulties in setting of the repertoire, especially since three festival participants came from other countries. The European performers were Francois Espinasse, titular organist of Saint-Severin church in Paris; Vincent Warnier, titular organist of Saint-Etienne du Mont church in Paris, Istvan Ella, well-knowned Hungarian organ player from Budapest. The Israeli organists participating were Elisabett Roloff, Sabin Levi, Yuval Rabin and myself.

Translated from Russian by Lana Krakovskiy