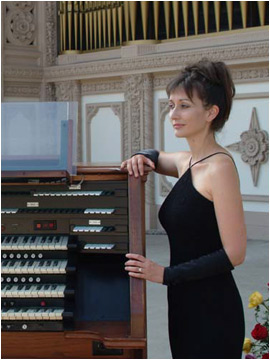 I am the Civic Organist of San Diego and I spend all my time performing concerts — either in San Diego or around the USA and abroad. I love to travel and feel it is a vital part of my exisitence as it keeps me on my toes! Going to a new country and savoring a different organ and acoustics is fascinating. In 2004, I had two visits to the UK, a trip to Canada, Germany, Poland and Czech Republic. My visit to Poland and Prague were extremely fascinating and I have highlighted some of the moments I spent on this wonderful tour.

I flew from San Diego early on August 9th and arrived in Prague, the “City of One Hundred Spires”, the next morning. After being met at the airport by Irena Chribkova, the organist of St. James Basilica, I was given the hospitality of the quarters of the Basilica, located close to Prague’s “Old Town Square”. At night, one could hear the chimes of the 1410 Town Hall Horologe. On another night, a dramatic thunderstorm highlighted the historic skyline of this, one of Europe’s most beautiful cities, and I recommend a visit if you ever have the opportunity.

The oldest organ in St. James’ dates from the beginning of the 18th century following a major fire at the church in 1689. The present instrument, reconstructed by Rieger-Kloss, is extremely powerful and magical acoustics enhance the listening experience. The stunning 1705 case is one of the most beautiful I have ever seen in my travels. Major work by Rieger-Kloss was done between 1981-82 including restoring the specification of the early work of Abraham Stark in 1705. The present instrument has four manuals with ninety-one speaking stops. There is also a small choir organ of mechanical action with slider chests in the gallery to the right of the chancel but the builder is unknown yet, its pipes show numerous similarities with the large organ at the rear of the church. I did not use this instrument in my concert, but I really enjoyed playing it.

My concert was part of the 9th International Organ Festival and this year was in honor of Petr Eben who celebrated his 75th birthday on 22nd January. In the program, I included the moving Requiem from his Faust For Organ composed in 1976. The concert was sponsored by the American Embassy and the U.S. Ambassador to Czech Republic was in attendance. The concert was recorded for later broadcast by Prague Radio — I truly relished the opportunity to present a program on this magnificent organ.

Following Prague, I flew via Vienna and Kraków to start a concert tour of southern Poland. The first was at the Monastery in the historic town of Jedrzejow. The Monastery dates from 1210 with the present organ being constructed between 1745-54 in the workshop of Polish organ builder Józef Sitarski. The instrument has four manuals, the fourth being a “pull-out” beneath the lowest fixed manual. It’s sole purpose is to transpose — a most unusual feature. The stop knobs are actually cast bronze handles and the instrument’s entire mechanism has survived intact. The blue and gold screen is stupendous and is located on the western wall of the main isle of the church. The wood casing was executed in the monastery workshop with the ornamentation coming from the wood-carving workshop of the Kornecki family of Kraków. My concert was part of the International Festival of Organ and Chamber Music, initiated in 1993, and takes place every July and August. Staying at the Monastery was a memorable experience — so very quiet.

In contrast, my next concert was in Radom in a very modern church. The organ was a new three manual mechanical action instrument built by an unlisted German builder. It was built to good standards and enjoys a fine acoustic. The concert was well attended.

Following Radom, a four hour train journey took me to Stalowa Wola-Rozwadów for a concert in another Monastery. The organ was built in 1996 by Warsaw builder Janusz Kaminski. It is a fine mechanical action instrument with a heavy touch possessing a strong Principal and clear speech throughout. The local television station came and taped the event including an interview with me and I was very glad they spoke some English! Staying in this Monastery was very interesting — I speak no Polish and they spoke very little English. One morning I awoke early to the lovely sound of the monks singing chant.

The last concert was in Lublin in the very stark modern church of 2000 which was opened by Pope Paul. The organ by German builder Carl Schuster of München was a transplant and dates from 1956 with electro-pneumatic stop and key action. The acoustic is stunning in this building! In addition to solo repertoire, I accompanied Düsseldorf based mezzo Sylwia Siwak. The concert was well attended with over seven hundred people.

This was my first visit to Czech Republic and Poland and it was rewarding to find that organ music is certainly loved in this part of the world. It is interesting to note that in Poland all the concerts were introduced by an MC who explained the history of the music to the audience throughout the concert. The superb attendance showed that Polish audiences obviously enjoy good organ music. I wish to extend special thanks to Robert Grudzien for organizing my tour in Poland.

Carol Williams is represented by PVA Management in the UK and Phillip Truckenbrod Concert Artists in the USA.