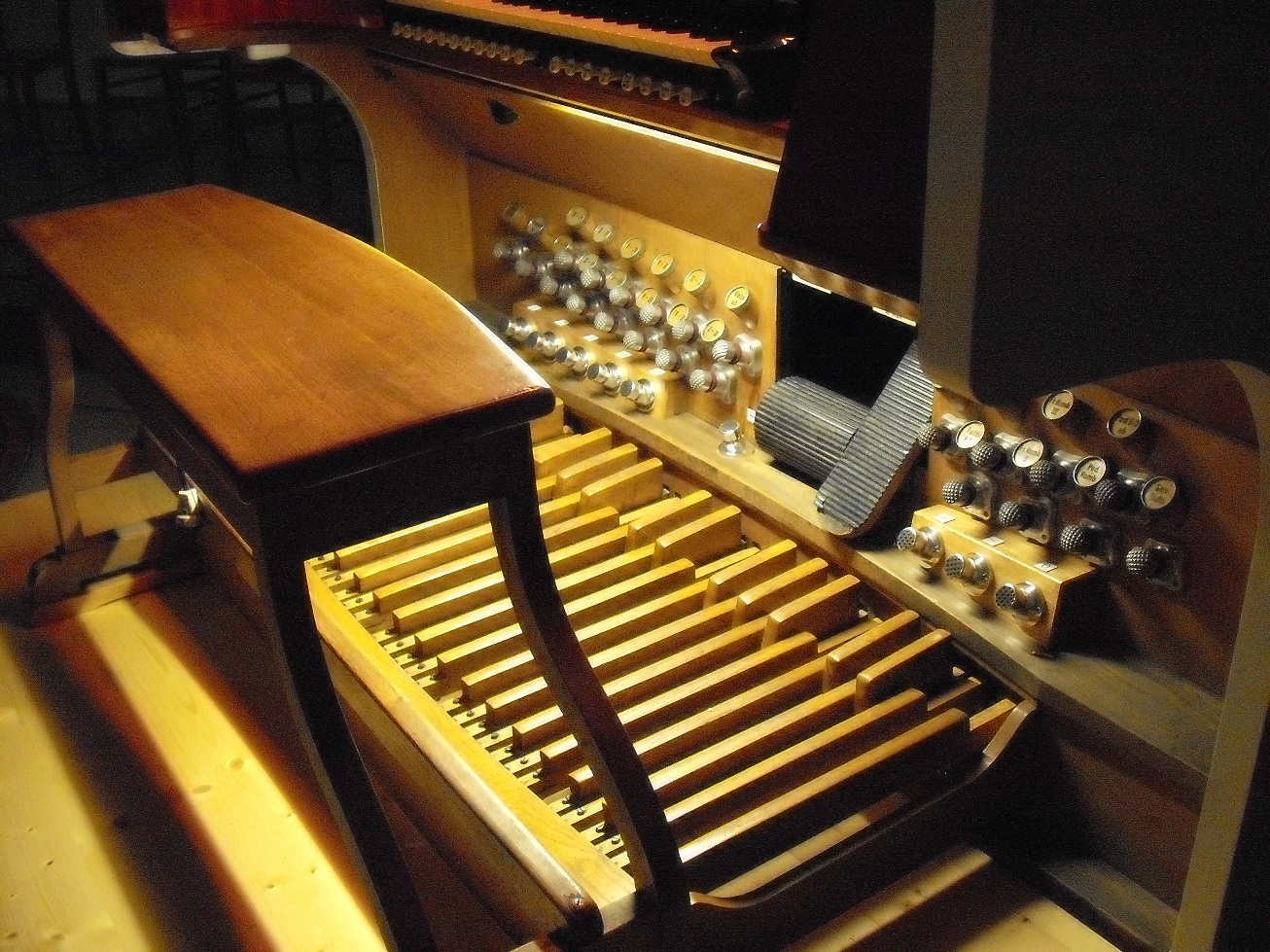 News from Maggie Pemberton in Munich

This time I would like to tell you about a ground-breaking retrofit stepper system which has only just hit the market.  It is a registered Utility Model and has been developed by Munich-based Burkhard Fischer of “fionic GmbH, Ingenieurbüro für Softwareentwicklung”.  Burkhard Fischer is an organ-player and engineer in one – but modestly declines to be regarded as a kind of “organists’ Einstein”.

One of the most striking aspects of the fionic system is the fact that it is external.  Everything can be prepared with great ease and at lightning speed with a few simple mouse clicks on a small laptop or “notebook”.  Another handy feature is that there is a menu in which you can store your combinations alphabetically (e.g. by composer), numerically (e.g. by BWV number) or even by recital date or type of church service.

Installation, carried out by Burkhard Fischer personally, is unobtrusive.  There are only some cables at the back of the console; the couple of new pistons/toe pistons go virtually unnoticed and the only other thing you see is the laptop itself, which is normally placed somewhere on the console near the music desk, and which can be disconnected and locked away after use.

The dimensions of this new invention can be more readily grasped when you consider the rather unwieldy five-manual console of the Theatinerkirche here in Munich, which basically has just the typical three rows of “free combinations” on offer.  This is obviously enough to accompany a Mass, but clearly presents a concert organist with severe limitations.

One of the most hair-raising hazards in the Theatinerkirche is the fact that several rows of vital couplers etc. are located effectively out of sight behind the music desk.  Once you’ve put up a Bach album or the gigantic RC hymnbook (measuring approx. 30x23x5 cm when closed and weighing in at over 2 kilos) you have no chance whatsoever of checking – let alone spontaneously altering – what’s going on there.

When playing at this console you have to swivel your head wildly from left to right, run your eyes up and down extensive arrays of knobs, scan across all the thumb pistons and squint down around your feet if you suddenly feel the urge to check which ranks and couplers you’ve actually drawn while in the middle of a hymn.  This is exceedingly difficult.  Especially if you are simultaneously trying to keep one eye on the tiny monitor (located during Mass on the top left of the console) focused on the priest, and the other eye on the capricious bulky gadget designed for the organist to indicate the hymn and verse numbers for the congregation in the nave (located on the music desk next to the outsize hymnbook, or somewhere else where it’s equally in the way and prone to fall down).  With the fionic system you only need to glance once and in one direction to see which ranks you’re playing on – i.e. at the laptop.  Everything you have currently drawn is “green” on the screen, while the other ranks and couplers remain “grey”.

Burkhard Fischer also speaks English and French, and I will include his own description here.  Please understand, of course, that we cannot take the lid off all the secrets which comprise the invention!

“With this new system most organs can be equipped with a brand new stepper system without much effort.  The system provides all common stepper functionalities and enables some new approaches for registration pre-programming.

Contrary to all console-integrated steppers, the new system runs on a Linux notebook with a graphical user interface.  This means: programming the combinations is no longer done physically on the organ console but on the notebook.  There you can switch each stop on and off, save your stop combinations, create and save sequences for individual music pieces, save them into the file system of the notebook (and organise them for easy looking-up in your preferred way) and combine several sequences together to a new sequence (e.g. if you want to play certain chosen pieces for a concert and just cycle through this combined sequence during your concert).

You have a lot of editing tools for your sequences, such as the insertion of additional steps, the overwriting of existing steps, deletion, copy/paste and even undo/redo.  In each sequence the step numbering starts from 1 and has no upper limit.  Therefore you don’t need to worry anymore about available free space in this system.  When your sequence is ready you can step through it using additionally installed +/- pistons or push buttons.

Apart from that, there are 5×5 separate combinations available which can be freely programmed.  They are independent from the step sequences and are used mainly to store your favourite instant combinations, for example for use during services.  These combinations can also be activated by additionally installed independent pistons or push buttons.

A big advantage of this system is that all your stored combinations are login protected.  That means other users can’t overwrite them.  The number of possible users is unlimited.

Another very interesting feature is that there is a preview mode where the stops in the organ are not switched when you select them in the user interface.  This allows you to check or to modify all your settings without any noise – which can be quite useful just before or during a service.

The export of all your settings via USB stick is also possible.  With the exported data and a Windows variant of the stepper programme you can review your combinations at your own PC.  Modifications can be made or new sequences created and can later be re-imported into the Linux notebook at the organ.

Apart from the installation of some pistons and push buttons, the console isn’t modified and can therefore be used without the new stepper system as before, which is important if your instrument is of historic interest.”

Burkhard Fischer installed the fionic stepper system in the Theatinerkirche in September 2009, and it has been successfully used since then by a variety of concert organists and church service deputies (including myself).  Two further installations have been completed in churches in Bavaria, and more are in the pipeline.  As you can imagine, costs vary depending on the instrument.  However, to give you a general idea, one would reckon with roughly 5,000 euros net costs, including the laptop, cables and other material, and the working hours.  (Travel expenses would also be incurred for work abroad.)

A short note now on the Theatinerkirche.  Its official name is St. Kajetan and it is run today by the Order of Dominicans.  It was completed in 1690 (the façade being completed in 1768), and is separated from the Residenz (the royal palace) by the historic Feldherrenhalle, which was built by King Ludwig I in 1844.  On 9th November 1923, Adolf Hitler and his followers marched to the Feldherrenhalle in an attempt to take over power in Germany (the “Beer Hall Putsch”).  Several Kings, Emperors and Electoral Princes are buried in this church, mainly in the crypt.  Sitting at the general console you can look directly into the crypt through a large round opening in the floor which is covered by a simple iron grating.  The Theatinerkirche is one of the grandest and most famous landmarks of the city of Munich.  War damage was, alas, horrific.

The two-manual side organ is housed fairly high up in a nave chamber opposite the pulpit and was built by Orgelbau Carl Schuster of Munich in 1950.  It can be played alone from a console at ground level in the nave.  This is sometimes the case for “smaller” services such as Vespers.  For Mass we usually couple the two organs together.

The main three-manual organ was built by Orgelbau Eisenbarth of Passau in 1960.  Along with the side organ, it is played from the awe-inspiring five-manual console mentioned above, which was provided by Orgelbau Eisenschmid of Andechs.  This is on a small movable ground-level platform directly in front of the pipes yet separated from the current position of the altar by a somewhat makeshift wall-to-wall curtain.

The main organ was overhauled in 2009 by Orgelbau Schingnitz of Iffeldorf.  It sounds firm and forceful when you sit at the Eisenschmid console, but the spacious acoustics and sheer length of the building lessen the impact somewhat, which is why we couple it with the Schuster organ when leading a big congregation.  When you play the side organ alone from the Eisenschmid console there is, of course, a rather marked delay before you hear what you’ve played.

Richard will kindly insert the specifications of the Theatinerkirche organs and some photos.  More photos as well as further information on the fionic stepper system, on the Theatinerkirche as well as on Munich and some of its major organs and attractions can be found on the homepages listed below.  If anyone would like to consider possible stepper solutions for their own or their church’s or building’s organ, please feel free to contact me or Burkhard Fischer at no obligation.  He has recently devised a solution for a pneumatic organ, and has no end of formulas up his sleeve!

This article originally appeared in the Organ Club Journal

Two of my previous OCJ articles mentioning organs in Munich and the Munich area can also be found on my homepage.

Specification of the Eisenbarth organ:

Specification of the Schuster organ:

(All pictures were supplied by Burkhard Fischer from his fionic.de website)